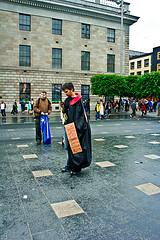 This day a series of events are organized worldwide in over 40 different countries, including in countries where Spanish is not the official language. As well as in Germany: at the Instituto Cervantes Berlin for example is there on the occasion of the Dia del Espanol an open day with lots of information about the Spanish language and Spanish culture and interesting offers. The Dia del Espanol is also a nice occasion, the good intentions of learning into action to implement and with the Spanish to learn to start. That’s why LinguTV is giving away the Spanish learning detective story “El regreso del Gato Fantasma” (3 months OnlineZugang) among all senders of u.g. form five times.

The Spanish learning detective story “El regreso del Gato Fantasma” is a co-production of LinguTV and the Cornelsen Publishing House and takes the Viewer on a manhunt in Madrid. In 12 episodes, viewers hunt together with the detectives of the European police, Anita Andress and Derek Dexter, a mysterious robber of typical terms and characteristics. The exciting Chase on El Gato Fantasma in Madrid users by the way learn the basics of the Spanish language or refresh their skills.